“Mecca of the Cyclists” Take a Historic Bike Ride 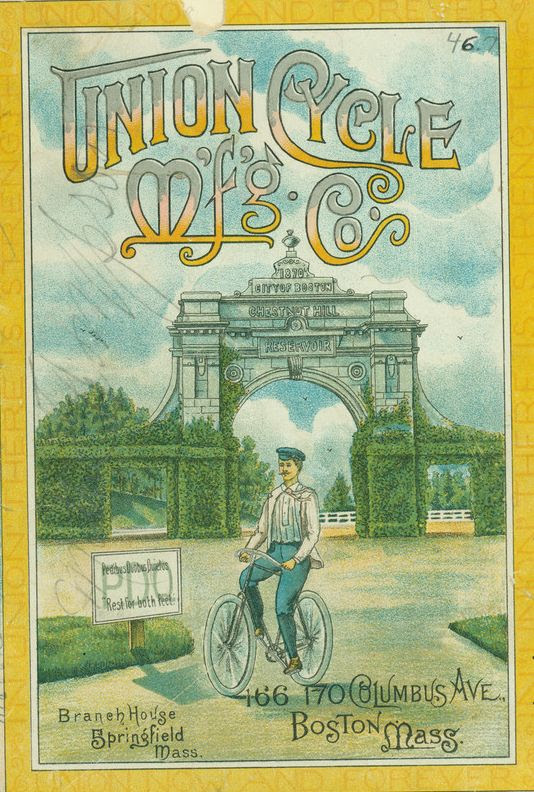 Stories from Newton’s Past Chestnut Hill Reservoir: “Mecca of the Cyclists”

When there wasn’t much green space in Boston 130 years ago, the Chestnut Hill Reservoir became a popular escape from the city. And what better way to get there than by bicycle? In the 1890s, men and women ventured forth, taking advantage of their new “safety” bicycles. These bicycles, made with equal-sized wheels, replaced the much less stable “penny farthing” models with oversized front wheels.

The Boston Herald in April 1895 reported that thousands of people went for a Sunday spin at the Reservoir, noting, “The boulevard, that Mecca of the cyclists, was almost as smooth as a billiard table, while the new speedway (Commonwealth Avenue) was fairly alive with ambitious flyers, anxious to exhibit their speed.”

An elaborate stone gateway (pictured in an advertisement for a bicycle manufacturer, courtesy of Historic New England) marked the entrance to Chestnut Hill Driveway when the reservoir opened in 1870 as part of Boston’s municipal water system. The landmark gateway was removed in 1895 to extend Commonwealth Avenue into Newton.

These days joggers and walkers far outnumber bikes on the paths around the Reservoir, but it’s fun to imagine the heyday of the 19th century bicycling craze that brought riders there. To see this spot for yourself, join our bike ride to the Reservoir on Saturday, July 30 at 2:00 p.m.