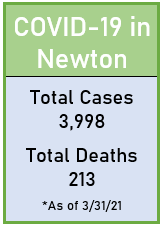 Bring a candle with you as we gather as a community. Wear a mask. Physically distance. Find solace together with music by Adrienne Hartzell Knudsen and a brief program led by members of the Newton Interfaith Clergy and including a resident who lost a family member and Dr. Errol Norwitz, President and CEO of our vital partner, Newton-Wellesley Hospital.

Newton Cases
As we’re seeing statewide, the number of new cases in Newton are going in the wrong direction after coming down and then staying relatively stable for the past several weeks.
We had 138 additional confirmed cases of COVID-19 over the past week from March 25 – March 31 which is 53 more than the 85 new cases we saw last week, and the 75 new cases we saw over each of the previous two weeks. The new cases bring the cumulative number of people in Newton who have tested positive to 3,998.
Over the two-week tracking period used by the State from March 14 to March 27, Newton had 182 new cases compared to the 156 during the previous two weeks, and 141 during the reporting period prior to that.
Newton COVID-19 Cases
+ Google Calendar+ iCal Export