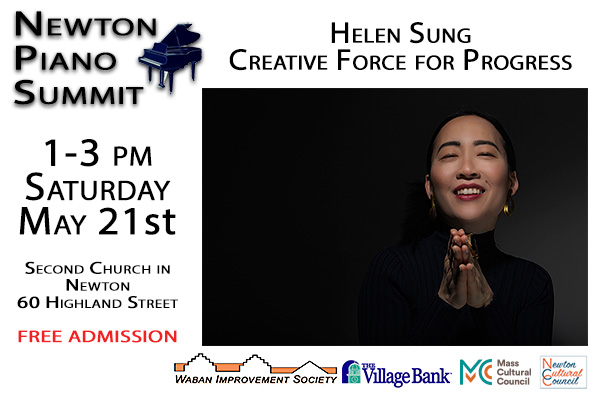 Simply put, Helen Sung is the most innovative, jaw-dropping new artist on the planet we have heard in years. She melds influences from jazz, classical, and Latin into astounding expeditions into new territories. Her latest album Quartet+ is breathtaking with incredibly tasteful, surprising, and dramatic new workings of some jazz standards, and inspiring original material. Currently residing in New York and touring major venues internationally, we are incredibly fortunate to have her make a stop in Newton on May 21st.

Helen is a 2021 Guggenheim Fellow. A native of Houston, Texas, and graduate of its High School for the Performing and Visual Arts (HSPVA), she went on to become part of the inaugural class of the Thelonious Monk Institute (now the Herbie Hancock Institute) at the New England Conservatory of Music. Her recent releases Sung With Words (Stricker Street), a collaborative project with renowned poet Dana Gioia, and Anthem For A New Day (Concord Jazz) topped the jazz charts. Quartet+ (Sunnyside Records), her latest release, followed suit, garnering a 4.5-star DownBeat review and inclusion in its “Best of 2021 Albums” list and a JazzTimes cover story (January 2022 issue). Helen and her band have at performed at Newport, Monterey, Disney Hall, SFJAZZ, and Carnegie Hall. Internationally, her “NuGenerations” Project toured southern Africa as a U.S. State Department Jazz Ambassador, and recent engagements include debuts at the London Jazz Festival, Jazz at Lincoln Center Shanghai, Blue Note Beijing, and the Sydney International Women’s Jazz Festival. She has performed with such luminaries as the late Clark Terry, Wayne Shorter, Ron Carter, Wynton Marsalis (who named her as one of his “Who’s Got Next: Jazz Musicians to Watch!”), MacArthur Fellow Regina Carter, and Grammy-winning artists including Terri Lyne Carrington, Cecile McLorin Salvant, and the Mingus Big Band. Helen is a Steinway Artist and has served on the jazz faculties at Berklee College of Music, the Juilliard School, and Columbia University.