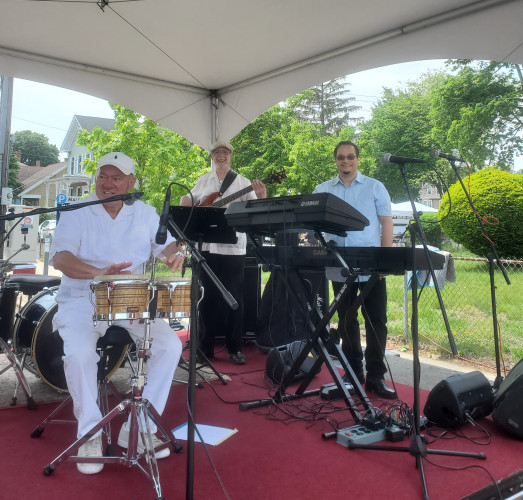 Join us for our Summer Concert Series at the Newton Centre Bowl*.
Originally from the Dominican Republic, Angel Wagner began his career playing with a cheese grater and fork! At age eleven, Angel went on a professional tour with a Merengue band, later performing in Miami and at Madison Square Garden in New York. Angel has performed with such groups as Aramis Camilo, Orchestra Cafe, Luis Ovalles, and Manguito.
Angel formed Grupo Fantasia in 1993, with musicians from all around the world. Over the years, Fantasia has performed at the Calle Ocho festival in Miami, as well as touring extensively throughout the Northeast. His performances include a multitude of schools, universities, colleges, fundraisers, private functions and musical galas, allowing him to team up with the most exclusive event coordinators and party planners in New England.
Fantasia has won many awards in Latin categories, including Boston’s prestigious 1993 Expose Award for BEST SPANISH BAND (1993), runner-up in the Hispanic American Chamber of Commerce Award for Education (1999), and the 2003 Boston Music Award Nominee for BEST WORLD CLASS ACT. Grupo Fantasia are the 2009 winners of The New England Urban Music Award for Best Latin Band.
*Newton Centre Bowl is the open area below the hut off Tyler Terrace in Newton Centre Playground.
Click HERE for more information and dates